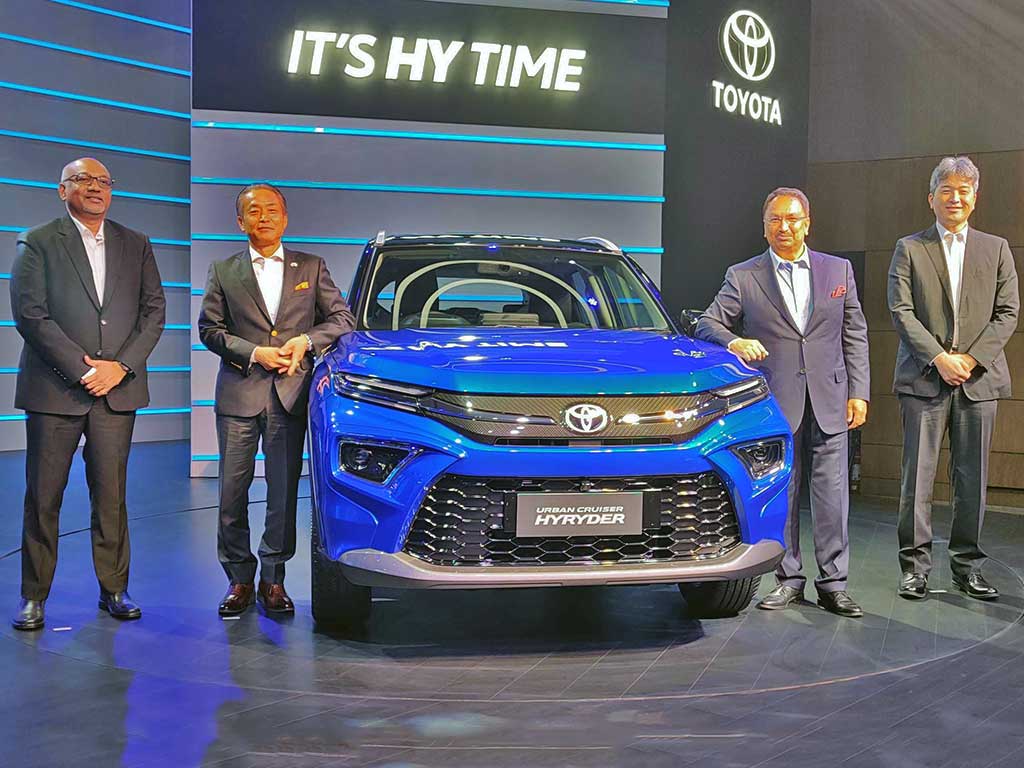 Toyota has unveiled the Urban Cruiser Hyryder for India, a crossover SUV co-developed with Suziki to compete with the Hyundai Creta and Kia Seltos on that market. It comes with two low-end powertrains, mild-hybrid and PHEV, and may later be exported into other countries as well.

Powering the Hyryder is the same architecture as the one used in the Suzuki Vitara. However, Toyota makes its own statement with original lighting, an elaborate front bumper and an ‘acrylic crystal’ front grille. The car is compact at 4,365 x 1,795 x 1,635 millimeters long, wide and tall respectively. The wheelbase amounts to 2.6 meters.

The interior resembles that of the Suzuki, including the same nine-inch infotainment system, the same wheel and HVAC controls.

Top trim levels enjoy panoramic glass roofs, all-around cameras, heads-up display and voice assistance. Wheels come in sizes up to 17 inches. Leather cabin is a paid option, and buyers of the PHEV version even get access to a bi-color trim if they want to (if you opt for the mild-hybrid version, the leather will be black).

To elaborate on the powertrains, one is a 1.5-liter petrol engine assisted by a 48V starter-generator for 102 PS (101 hp / 76 kW) and 135 Nm (100 lb-ft) of torque. The transmission can be five-speed manual or six-speed automatic, and you can even order AWD for a premium.

The other one combines a naturally aspirated engine rated at 92 PS (91 hp / 68 kW) with an electric motor contributing 79 PS (78 hp / 58 kW) of its own. The system output maxes out at 115 PS (113 hp / 85 kW) due to various limitations, which a CVT carries to the front wheels. A small traction battery is enough for 25 km (15.5 miles) of driving range, and the manufacturer claims up to 40% of daily drives will be covered by that mileage.

Pre-orders are already running, but offline sales will not start until August.