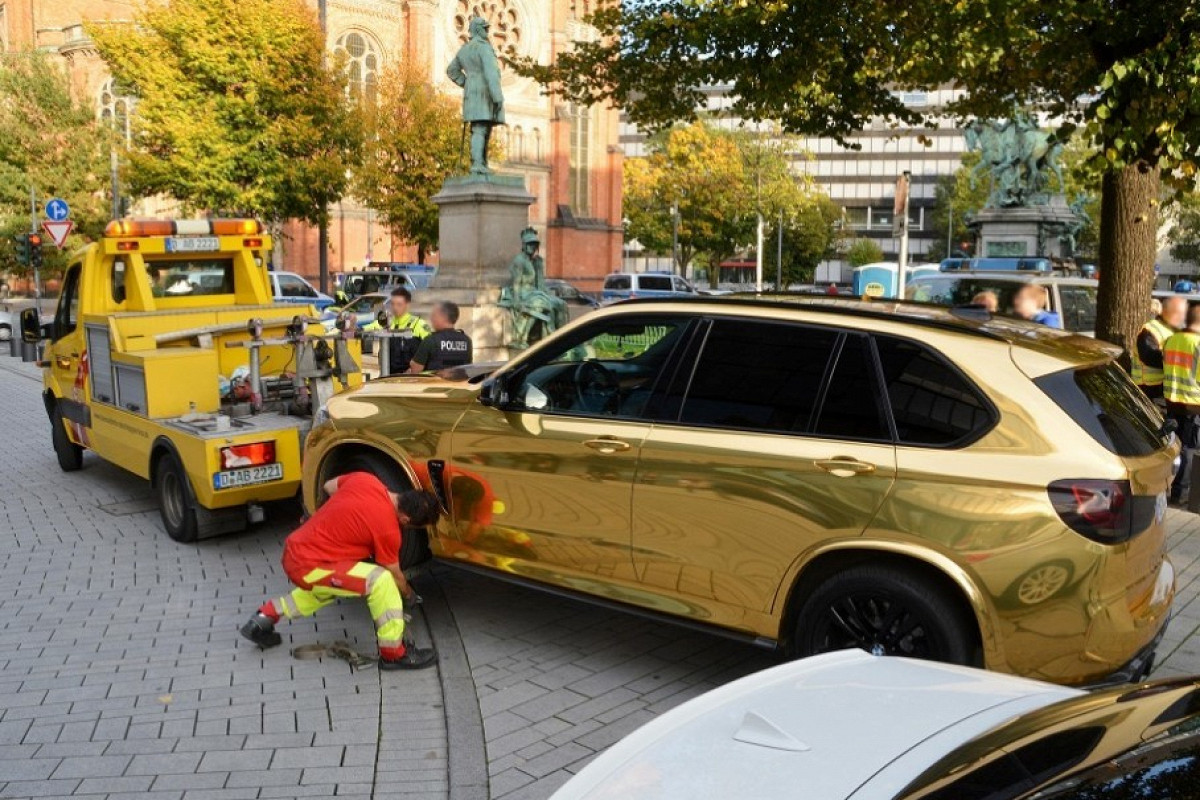 A police patrol in Düsseldorf, Germany has spotted a BMW X5 moving down a street encased in an eye-wateringly shiny gold wrap. The driver was forced to stop and had his car immediately towed away.

According to the press statement, the golden BMW X5 was found too dangerous for the other drivers due to its blinding glare, which could cause an accident. In turn, the owner said he was shocked to discover that the wrap – which he has apparently paid €3,000 for – could be an issue for anyone.

In turn, Harold Schmitke, General Director of the Association of Tuners of Germany, pointed out that if a modded car causes problems or inconvenience of any kind to any other traffic participants, then driving it is out of the question.

Auto Show 25-09-2020
Multiple hypercars have run a demo lap before the start of this year’s 24-hour endurance race on the famed Circuit de la Sarthe, a.k.a. Le Mans. Heading what looked like $10+ million worth of vehicles was the all-electric Carmen by Hispano Suiza.
Like
Comments 1

Technology 24-09-2020
BMW has updates engine ranges in multiple car series, including the 545e xDrive Hybrid coming up this fall (see video) and many others.
Like
Comments 3

Novelties 24-09-2020
After a waiting time that seemed only too long, Volkswagen finally took the wraps of its first production SUV powered by batteries: the ID.4.
Like
Comments 0

Novelties 23-09-2020
The 2021 Range Rover Velar has arrived in Europe with almost zero visual novelty, but substantial changes in equipment and tech.
Like
Comments 0

Novelties 23-09-2020
The long wait is over: BMW has removed the wraps from its new M3 and M4 models. Both debuted in their topmost Competition spec armed with the 3.0-liter turbo-six engine of the X3 M and X4 M, but with higher torque.
Like
Comments 2

Car Tuning 22-09-2020
What happens when you stress-test a Cummins diesel tuned to deliver around three thousand horsepower? “Fireworks” certainly is one of the possible outcomes, and this is what happened to this Dodge Ram truck with two people still inside.
Like
Comments 0

Novelties 21-09-2020
The German automotive giant has disclosed the recommended retail prices for its new W223 S-Class lineup.
Like
Comments 0

Car Tuning 17-09-2020
U.S.-based tuner Gunther Werks started shipping its 400R track day tool – essentially modded Porsche 911 (993) coupes – to clients. Randy Pobst of Motor Trend was lucky enough to get his hands on the first copy and has already set a record piloting it.
Like
Comments 0

Concept Cars 16-09-2020
Meet the Z Proto Concept, a Nissan-branded design study which will eventually crystallize into the successor to the iconic 370Z.
Like
Comments 0

Technology 16-09-2020
Aston Martin has worked together with Curv Racing Simulators to produce AMR-C01, a cybersports-oriented racing simulator machine with impressive specs and pricing.
Like
Comments 0

Meet Volkswagen Golf Variant, a wagon due out in Q4 2020

Novelties 09-09-2020
With the eighth-gen Volkswagen Golf debuting last fall, many of us were looking forward to its estate/wagon version coming out – and it is finally here, called Variant and sporting an off-road-capable Alltrack version.
Like
Comments 1

Technology 07-09-2020
Speaking about the potential of the company’s new MEA electric vehicle architecture, Daimler AG CEO Ola Källenius hinted that nothing stood in the way of creating a battery-powered Maybach.
Like
Comments 0

Meet Aston Martin Victor, a one-off supercar with One 77 roots

Car Tuning 07-09-2020
Aston Martin has finished yet another ultra-exclusive project car. What used to be a rare production coupe named One 77 became Victor, a road rocket like no others.
Like
Comments 0
x
Feedback
Contact Form
UP